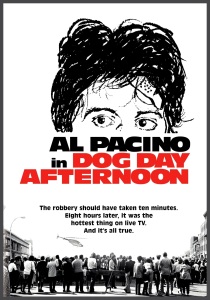 On a hot summer afternoon, small criminals Sonny and Sal rob a bank. Everything goes wrong. They are holed up inside with a bunch of hostages and surrounded by the cops. The whole thing turns into a media circus.

Dog Day Afternoon takes some time out before properly starting with the story to show us a picture of Brooklyn. It is a sweltering summer day, and all of life is contained within Brooklyn. Rich and poor alike are out in the streets and living life. Streets are full of trash, people sleep on the sidewalk and stray dogs stroll about. Meanwhile, rich folk lounge at the beach, jump into their roof pool or ride their motor boats. It’s a picture of class struggle. It’s a great New York film.

And really quiet-like, the afternoon ends with a silent little bank robbery. Al Pacino (Sonny) in a classic role leads two associates in a quiet, smooth takeover, but from the start it is clear that they didn’t really talk this through. This team is not an oiled machine, no matter how much oil they have put in their hair. The guys are so nervous that you can’t help but root for them to let it work out. So many little things go wrong and I just feel nervous and bad for them.

The realism of the script and the acting is the key thing here. This is not a choreographed ballet of a robbery, in and out like a smooth criminal. No, it is Al Pacino fumbling about and yelling and struggling with little bumps in the road. After the first 5 minutes, things are taking too long but they could still make it, this could end without a fuss right now, but you know that just isn’t going to happen. There is no music during all of this and that really get the tension building up. It has this same gritty realism that was recreated later in Heat (1994).

It is much funnier than Heat though. They can’t even keep the money teller girls in check. The money tellers need to go to the bathroom and start arguing, and the whole thing turns into the most dramatic media circus. Al Pacino is a loud-mouthed, small-time crook and his partner Sal, played by the uncomfortable looking John Cazale, is a ticking time-bomb of nerves. They have little touching moments between them that give glimpses of lonely, troubled lives. They have to carry the whole film by the two of them, and especially Pacino has a commanding presence. He paces back and forth, and his delivery always perfectly timed. It is really his show.

The whole movie is like a little dance of great one-on-one acting scenes of sharp dialogue between Pacino and Sal, or Pacino and the police officer (Charles Durning). And side characters add some nice variation to it, like the frowning FBI agent or Sonny’s loud wife who suddenly barges into the movie. It keeps up a pace of excitement and comedy. Only in the second half, things start to drag a bit and the ending sort of strangely fizzles out.

It’s a story about the power of the media, and the legendary director Sidney Lumet would go on to make Network (1976) next, which is perhaps the defining classic about the media. But in Dog Day Afternoon he revels in it like a try-out. The media is on the side of the lower classes here. Reporters are selfishly looking for news, but they communicate Pacino’s situation to his family and to all the supporters who cheer him on. At times it even feels like Lumet is going overboard with it. The “circus” is less believable than the opening half hour and the cynicism of the onlookers is downright theatrical. It feels like Lumet is taking some liberties with realism for the sake of comedy.

This movie is bloody perfect. It’s a great action-comedy. It has great acting, great side-characters, a good script but a bit theatrical. They could have cut 15 minutes to make it a bit leaner and sharper in the second half, and the ending is a bit underwhelming, but it’s still a blast.