With the release of the third Star Trek film, Star Trek Beyond, of the new rebooted version of Star Trek, I thought it would be nice to look back at the earlier films. Maybe the new films will inspire more people to seek out the older series and films, but they should be prepared to see something that is quite different from the current rebooted films. I’d like to run through the films as a quick guide on what to expect. The films so far have brilliant moments, but there are also some turds.

All films can be divided into three series, more or less.

First series: the old crew in their later years.

When Star Trek: The Motion Picture came out, the old series had already finished. The film starts with the opening music of what would later become the title music of the second series with Captain Picard. In this film, the old crew of Kirk, Spock and McCoy have made career in Starfleet. Kirk is an Admiral, but when an alien ship threatens Earth, he takes command of the Enterprise to investigate the danger.

The Motion Picture came out two years after Star Wars (1977) and it is the tonal opposite of that film. It might be the slowest film of all time. Large seconds of the film are simply the Enterprise floating through the innards of a giant alien ship. The prevailing mood of the film is slow and thoughtful. Even though the film wants to create a sense of mystery and awe, you can imagine that the general public had a lukewarm reaction to the film. It underscored the nerdy, intellectual nature of the series, but it was also just generally an unsuccessful film that failed to capture what made Star Trek interesting. It was an odd conception.

Generally seen as a great success, The Wrath of Khan changed the formula and tried to shock people. From the opening scenes, there is tension and violence, showing that this is an action film with a heavy emotional punch. Kirk is ageing and has a lost son. It also has a great space battle. In what would become a formula later on, The Wrath of Khan pits Captain Kirk against an enemy who is out for revenge. This idea is so incredibly chewed out by now that it lost all taste, but Kirk and Khan play a cat and mouse game, and the film ends with a whammy that came as a complete shock to the viewers: the death of Spock.

The most recent three movies all try to copy The Wrath of Khan and its sequel The Search for Spock. Each has a revenge-seeking nemesis, and each shows the Enterprise getting destroyed. But for the old fans of the old series, this was the first time these things happened, and back then they still had an impact. 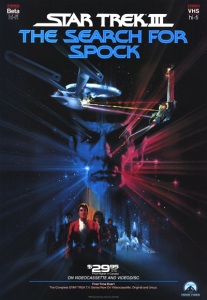 The third movie is a direct sequel to the second, a direct continuation of the story. Kirk and the crew go in search of a genesis device that sparks life on new planets, to try to bring Spock back to life again. The film stands in the shadow of the Wrath of Khan. The main villains here are the Klingons, with a guest appearance of Christopher Lloyd as the Klingon captain who wants his hands on the genesis device.

It is worth seeing as a sequel to the previous movie. There is some comedy here that works well and a nice sense of adventure. For the first time we also see the destruction of the Enterprise. For the fans, this is what gave the Search for Spock its punch. It was new, daring and shocking!

This one concludes the loose trilogy of films 2, 3 and 4. You might be surprised that we start this film with Kirk and the rest flying a commandeered Klingon ship, but that’s where the previous film ended. The Voyage Home is a fan favorite and was a box office success. I loved it.

It is best not to take this film too seriously. An alien probe arrives at Earth and tries to communicate with our whales, but the whales got extinct. It’s a great setup. Kirk travels back in time through a ridiculous method with bad special effects to 1986 to capture a whale and take it to the future. Hilarity ensues as our starfarers try to navigate the 80s. Expect lots of hippy sentimentality and quotable lines.It has an environmental message before that became a thing in Hollywood.

What happened here? Universally disliked, The Final Frontier is not only boring, it has a ridiculous plot of the Enterprise being hijacked by a fanatic who is convinced that he can find God at the center of the galaxy. They do indeed find a powerful creature there who tries to convince the crew that he is indeed God. It actually doesn’t sound that bad when I say it like that, but it has a really bad script.

William Shatner himself directed this one. Maybe he shouldn’t have. There are just too many embarrassing moments of forced camaraderie, including a campfire with Kirk, Spock and Bones singing row row row your boat. Make it stop. Make it end.

The undiscovered country: the future. Film 6 is just plain a really good film. One of the best SF films of the end-80s, early-90s. It combines action and suspense with great characters and an injection of Shakespearean dramatics. Including a magnificent Christopher Plummer as a Shakespeare-quoting Klingon general. It is a self-ripoff of Khan but Plummer steals the scenes.

It is a movie about assassination plots, fear of the future, political thrills, alien prison escapes and leaving the past behind. A moon of the Klingon homeworld explodes, destroying the future of the Klingon homeland. Now they are ready to discuss a peace treaty with the Federation, but the Klingon Emperor gets assassinated. Kirk is framed and is sent to a Klingon prison. It has some of the best lines and maybe the best music of the films. I like this one very much.

The film ends with a beautiful, heartfelt goodbye from the old crew. It is also a goodbye to all the fans. They make way for a new generation.

7 Responses to All Star Trek Films. A Quick Guide (part 1)