Ada Palmer – Too Like the Lightning (2016) Review. French Enlightenment in the 25th Century

Posted on January 2, 2019 by Jeroen Admiraal 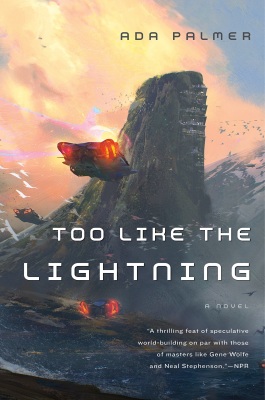 The moment of opening Ada Palmer’s Too Like The Lightning is being submerged in a totally alien social structure. There is so much going on and so much to learn to understand this future society, that this is quite a hard book to read. Like being submerged, we may struggle to find our breath, like learning to snorkel or dive for the first time. Not only that, but Palmer uses old, Enlightenment era English and other old-fashioned affectations that make the text even harder to penetrate. But it pays off to persevere and after a few dozen pages, a general shape is taking form of the year 2454 and it is a fascinating, fascinating world.

As the subtitle says, Being a Narrative of Events of the Year 2454, we are addressed by a man named Mycroft Canner, a former criminal, convicted to serve other civilians as a Servicer in exchange for food. In this age, nations are an archaic idea and people instead cluster in seven different, world-spanning interest groups, Hives, based on personal preference and philosophy. There are the Humanists, living in a democracy, the Masonic Empire, speaking Latin and following a monarchy, Mitsubishi, a shareholder corporate “timocracy”, and four others with equally different social rules. Furthermore, the traditional family structure has disappeared and people cluster in communities based on shared history or interest, who share the raising of children and work. A second main character, Carlyle Foster, is a Sensayer, a sort of house-calling philosopher who visits communities as a social service for all your religious and spiritual needs without proselytizing a specific creed but helping people find their own preference.

Mycroft and Carlyle cross paths when they are confronted with a young boy named Bridger who apparently performs miracles. They painstakingly keep him secret. Mycroft, meanwhile, being very connected to all the major leaders of the Hives, flits back and forth across the planet as a Servicer to run errands for these leaders, and so we get a glimpse of the coming conflict between the Hyves. War is on the horizon, and Mycroft is our window through which we see the gathering clouds, and Bridger will be the lightning.

The plot moves very slowly – the first novel only covers about five days – and is heavy with exposition. It took a long time to get a good grip on this future world, while Mycroft travels from counsels to office meetings to imperial palaces. A deluge of strange settings and side characters buries me, while I am still struggling to understand the basic outline of the story and its world. The Victorian style in a futuristic setting is similar to Neal Stephenson’s The Diamond Age: Or, A Young Lady’s Illustrated Primer (1995).

Palmer affects an 18th century style in her writing, having Mycroft Canner frequently addressing the reader directly, in the sense of “Dear reader, please forgive my brashness, but…” and so fosters a direct relationship with the reader. It may seem like overkill to present such a complex future world and then to also affect an antiquated narrative style, just to make things difficult for the reader. However, Mycroft’s narration actually balances things out wonderfully. He talks to us in a warm, comforting voice to explain the political machinations. This allows Palmer to do deep dives into the future whilst having Mycroft say: “don’t mind all these details, dear reader, the point is as follows.” It is similar to Gene Wolfe’s Book of the New Sun in which Severian narrates his story to us and like Severian, Mycroft might be an unreliable guide.

But did I enjoy it?

Well, some annoyances crept up. I could have done with a faster than glacial pace. The characters all hang around the same locations, having long conversations as a form of exposition. And all these people live together but are also all world-moving influencers, which I found unrealistic. And Palmer does this in-the-future-there-is-no-gender thing, so instead of he and she everybody says they and their, and it’s annoying. I don’t really understand why this is an issue in general. And Mycroft uses he and her, but he uses it willy-nilly, depending on whether characters have, according to him, dominant or submissive personalities, calling people in power “he”, and apparently he does this for us, to accommodate us, the readers.

In a way, though, the confusion in intention is deliberate, because Palmer’s future is not a utopia. In the second half of the novel, it all starts to come together, and darker undertones of this society emerge. Including the removal of religious and gender expressions, which is recognized as being repressive in its own way, and the break-up of society into Hives of interest also causes a sort of vertical stratification. In short, Palmer is cleverer than I suspected and her future world is complex and struggling with these issues, much like our reality.

Ahh, now I am starting to understand what Palmer is doing. In the 18th century, the world was prudish and dogmatic. When the French philosophers entered the scene – Voltaire, De Sade, Rousseau – they talked and wrote openly about sex and religion, and it was revolutionary. Now look at today’s world. We see strong trends towards politically correct gender neutrality, atheism and individuality. Continue along these lines and Palmer’s 25th century is a world in which the family unit is broken up and both gender and religious proselytizing are outlawed. In this world, the French philosophers make a come-back. In the hidden corridors of power, sex and religion are rediscovered and wielded as weapons among the powerful, as if speaking secret and potent languages.

I also enjoyed it in the sense of admiring it. As an exercise in imagining the future, this is very impressive, ambitious stuff, and the writing is very good. Palmer is versatile when it comes to style and dialogue.

Too Like The Lightning joins the heavyweight category in philosophical and intellectual engagement, and can measure itself against established Big Important Works like Wolfe’s, Herbert’s and LeGuin’s. Incredibly ambitious and deeply, meticulously thought out, it is not an easy beach read but it is very impressive and admirable what Palmer does here. As a narrative, I had some problems with it but I am curious about the second half of this story.

Like Loading...
This entry was posted in Books, Science fiction and tagged Ada Palmer, Books, review, science fiction, SF, Terra Ignota, Too Like the Lightning. Bookmark the permalink.

7 Responses to Ada Palmer – Too Like the Lightning (2016) Review. French Enlightenment in the 25th Century